People with Parkinson's in North Orange County have been asking for a Rock Steady Boxing location near them for years.  Connie Anderson made their wishes come true by opening a Rock Steady in Anaheim, Ca.  Connie's boxers will tell you that their group is like family and will attest to the fact that exercise is helping them stay well.  During Covid, Connie has taken her classes online so that her fighters can continue exercising at home.  Their classes whether in person or online are always full of laughter.  You can also find Connie running the Capriana Warriors Parkinson's support group which is also meeting virtually during the pandemic.  For more information on Connie's group, you can reach her at northocwarriors@rsbaffiliate.com.

PEP4U is a Parkinson's specific fitness program in Orange County, California.  They offer exercise classes led by professional instructors trained in Parkinson's Disease exercise promoting balance, coordination, strength, and overall movement. Their classes include yoga, PWR Moves, strength  and cardio classes, multitasking and cognition classes,  and shadow boxing.  Best of all, it is all free.  PEP4U is a non-profit organization supported by donations.

Typically, you can find this great group getting fit at the YMCA in Laguna Niguel.  Due to the pandemic, they have taken their classes online.  You can participate in live online classes or choose a recorded class to do on your own schedule. You can find more information on the PEP4U site.

Donna Clervi is a certified Rock Steady Boxing coach in South Orange County, California. When you meet Donna, one of the first things you will notice is her passion for helping others.  She is tough on the outside and will make you work your hardest but on the inside, she has a heart of gold. She truly wants her fighters to succeed in living their best life with Parkinson's. She sets  high standards for her boxers and then shows them how to help themselves in slowing  Parkinson’s progression.

Donna comes to Rock Steady Boxing M.E. Fitness after more than 30 years in the healthcare industry.  Along with being a coach for people with Parkinson's,  Donna facilitates the South Orange County Parkinson's Support Group and runs the Donna Clervi Foundation which supports, encourages, and trains people living with Parkinson's. Those who have worked with Donna in efforts to help the community would say she sets the gold standard for volunteers.  She is a professional who has brought a lifetime of hard work and decision making to the local Parkinson's organizations she works with.

Erin is the founder and owner of  RX Ballroom Dance. She provides dance therapy to people with Parkinson's all over Orange County. Inspired by a grandmother who struggled with Parkinson’s, Erin combined her professional dance skills and teaching background to create Rx Ballroom Dance. Their mission is to use ballroom dance to preserve and enhance the quality of life in people who are confronting neurological conditions. The program consists of weekly ballroom dance classes specifically designed to engage both the body and mind to alleviate symptoms of Parkinson’s. Using choreography to learn these dances also helps to stimulate brain activity and improve memory recall. For all participants, ballroom dance helps with:

When you meet Erin, you will quickly see that her enthusiasm is contagious.  She loves what she does and welcomes not just people with neurological problems but their caregivers and/or spouses as well. She is proud to tell you that all her classes are 100% free.  RX Ballroom Dance is funded completely through donations.

Due to the Covid pandemic, Rx Ballroom is currently offering online Zoom Classes as an alternative to in person classes so members can stay active and continue dancing. You can get more information at Rx Ballroom Dance or email Erin at info@rxballroomdance.com

Find out more about building your care team. 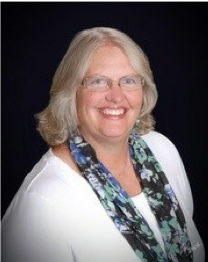 Karen Skipper is a Board Certified Music Therapist and the director of the Orange County Tremble Clefs. The Tremble Clefs is a therapeutic singing group that serves people with Parkinson's.  Karen's goals for her group are to:

It would be difficult to find one of Karen's clients who doesn't love singing with her group.  When her group shows up to an event, you can feel the joy in the room.  They truly show that music is not only good for the body and mind but the soul as well.  Karen demonstrates a passion for helping those with Parkinson's not only by leading the Tremble Clefs but by frequently speaking at support groups.  Her passion is obvious when you hear her.

Most recently, due to the Covid crisis, Karen has taken her group online which has enabled even more people with Parkinson's to join in from all over the world.  You can get more information at OCTremblClefs.com or email Karen at therapymom2@gmail.com.

"We look forward to singing with you." 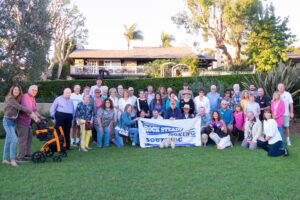 RSB South OC classes are a blend of boxing,  cardio exercises, strength training and stretching. The class activities are designed to help improve balance, cognition, flexibility, vocal strength and even dexterity.   If you watch one of Gretchen's classes, you will not only notice the hard work but the laughter and smiles can not be ignored.

"Rock Steady South OC is a big family.  We laugh with each other and sometimes cry with each other but at the end of the day, we are there to support each other." You can reach Gretchen at southoc@rsbaffiliate.com 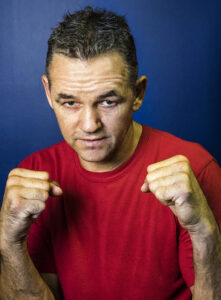 ROCK STEADY BOXING
RANCHO SANTA MARGARITA
Gary “Boom Boom” Ballard, former World Super Middle Weight Championship Fighter, has provided professional personal training services in Orange County, CA for more than 16 years.
Gary assists people battling Parkinson’s to take an active role in improving their well being with non-contact boxing inspired fitness training. Exercises are based on traditional boxing drills and designed to optimize agility, speed, endurance, balance, hand-eye coordination, and overall strength. While exercises are adapted to individual capabilities and fitness levels, they remain rigorous and enable participants to push past self-imposed limits of ability.
Gary's fighters are a determined group of men and women of varied ages and varied stages of Parkinson's.  The workouts are tough but Gary is always there motivating and pushing them to keep going.  He is as kind as he is tough.  You can contact Gary at Ballard Fitness.
Read more →

Tony Garrett  is a certified Rock Steady Boxing coach and a professional personal trainer. He has worked with the Rock Steady Boxing SC program, for the past 4 years at American Gym in Costa Mesa. There he worked with athletes in all stages of Parkinson's Disease.He also has additional professional training in: muay thai, boxing, kickboxing, and general strength and conditioning.
With his Rock Steady Boxing and personal training experience, his own boxing and muay thai background, he transitioned "Rock Steady Boxing SC" to "NeuroFit Boxing.” He has incorporated training methods that focus not just on the body, but on the brain.
He prides himself on being positive, supportive, and all about helping his athletes hit their fitness goals. Tony  “I would love to chat with you about how NeuroFit Boxing can benefit you, no matter where you are today.”  You can find out more about Tony at Neurofit Boxing.

Tony Garrett is the owner of Neurofit Boxing in Costa Mesa

Claire McLean PT, DPT, NCS has been serving people with Parkinson's in Orange County for more than ten years.  She is a physical therapist who specializes in Parkinson's and owner of Rogue PT and Wellness in Fountain Valley, California. Claire holds a doctorate in Physical Therapy from USC and did her neurologic residency through USC and Rancho Los Amigos.  On any given day, you may find Claire assessing patients one-on-one or running a variety of classes in her gym.  She is a PWR! Moves certified instructor and teaches not only people with Parkinson's but other therapists and  fitness professionals.  Claire is a firm believer in the concept of exercise is medicine and hard work paying off and you will not only see hard work in her classes but you will see people living well with PD and improving their quality of life on a daily basis. Claire doesn't just stop at exercise, she is often found teaching her clients about healthy eating for Parkinson's and talking at local support groups. Recently Rogue PT has launched a new online fitness program called Rogue in Motion.

This took on real meaning for me a few days ago:

Melanoma is the deadliest form of skin cancer. In the early stages, Melanoma can be treated successfully with surgery alone, and survival rates are high, but after metastasis, survival rates drop significantly. Therefore, early and correct diagnosis is key for ensuring patients have the best possible prognosis. (From Cancer Biology and Therapy Journal)

During a routine skin check, my dermatologist said there was a spot that she wanted to biopsy. Fine, I have heard that before and it was never a problem. A few days later, I got the get the call. The dermatologist said, “The results of the biopsy I did last week on your shoulder are back. I have good news and bad news. The bad news is, you have Melanoma, but the good news is, it is very small and we have discovered it early.”

The bad news was apparent to me, but the good not so much. After some research, the good news started to sound better. She caught it early and expected no more problems with that area. However, other spots could show up. The prescription for that is a skin check every three months.

A couple of days ago, I had surgery to remove the Melanoma. It was routine and took about an hour. The aftermath of the surgery is NO EXERCISE for two weeks. It was pretty clear that no compromise was forthcoming.

WHAT SCIENTISTS RESEARCH AND DOCTORS ARE FINDING

Studies suggest there might be a connection between Parkinson’s Disease and Melanoma.  My dermatologist said there have been more melanoma cases in her office since the pandemic started in March. Her colleagues are reporting the same. She isn’t sure why.  Also, she is seeing an increasing diagnosis of Melanoma in her Parkinson’s patients.

IF YOU HAVE PARKINSON’S, SEE A DERMATOLOGIST ANNUALLY!

Don’t count on your internist for a full head to toe skin check. The dermatologist I go to is very thorough.  It’s a hide and seek
game and you want somebody trained in the field. I am asking you to make that skin check appointment now and keep it.

This is not the report I wanted to see but I would rather see it now than a year from now.

MAKE THE APPOINTMENT – SEE THE DOC