Time to Speak Up

reason. Over 200 years ago, James Parkinson wrote his essay called  Shaking Palsy where he described Parkinson's.  Yes, scientists have been documenting and studying Parkinson's for a very long time.  We have been waiting too long for a cure or at the very least, a treatment that will slow this beast down or stop it in its tracks.  No one seems to know why it is taking so long. Other diseases have received more funding and attention and have gotten results faster.  No one is saying that the people with those diseases aren't deserving of treatments.  We all want health and healing.  I do wonder why funding for Parkinson's from the NIH is going down each year while the number of people being diagnosed is going up. In the book Ending Parkinson's Disease, the authors note that "by 2030, there will be a 10% higher risk of a forty-five year old individual eventually developing Parkinson's disease than there is today."

Dr. Ray Dorsey said, "We know how to prevent Parkinson's. We just aren't doing it."  Are you ok with the status quo?   If not, YOU should be doing something about it. Don’t wait for someone else to take care of it. They might be waiting for you to take care of it.  It isn’t hard to be an advocate and doesn’t need to take a lot of time.  If we all join together, we can make big things happen.

Here are a few things you can do to get started in being an advocate:

Together we can make a difference.  It is time to speak up. 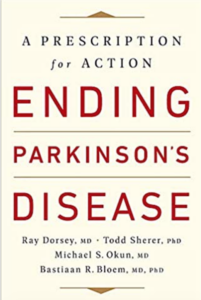 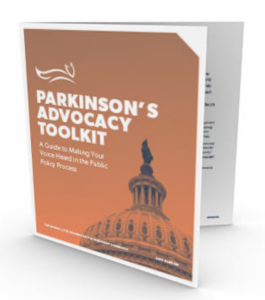